“I had to keep fighting,” he said. “I couldn’t give up. I knew I could beat COVID, I had too much to live for, I had to stay alive.” 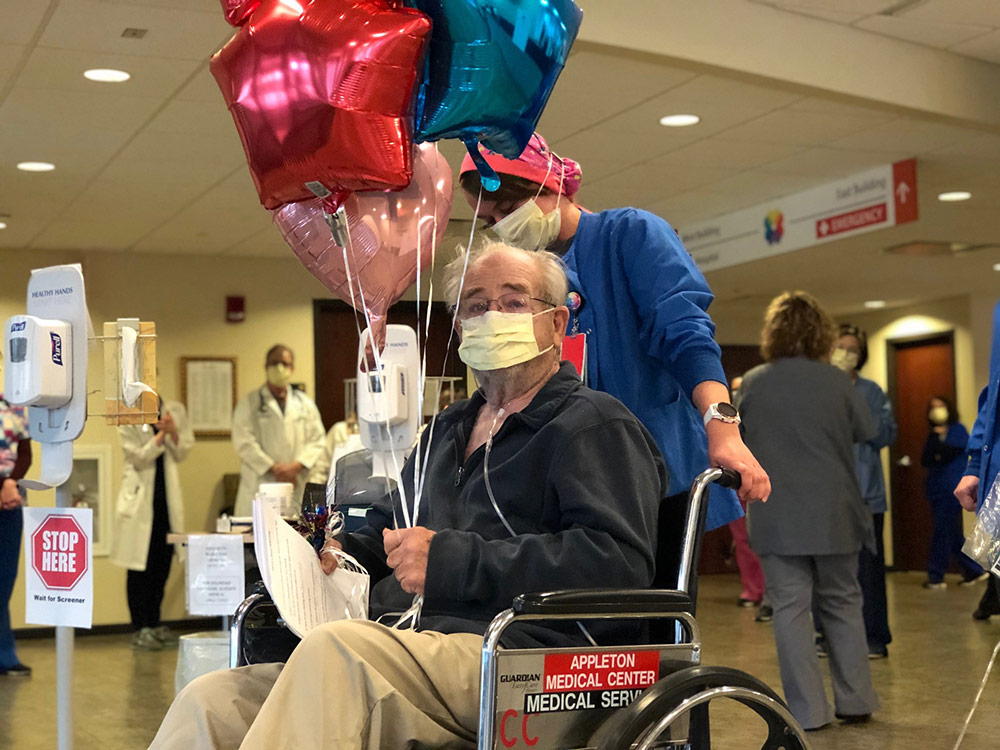 Jameson, 79, said he was living for his family, particularly nine great-grandchildren.

“I have some cute great-grandkids,” he said. “I wanted to watch them grow.”

Jameson was diagnosed with COVID-19 after he started to feel sick in early spring. Looking back, he is fairly certain that he was exposed while working as a truck driver. Jameson explained he was dropping off a shipment at a warehouse when he was told five employees at the location tested positive for the virus. So when he began feeling ill, he said he wasn’t shocked. After testing positive, he was admitted ThedaCare Regional Medical Center-Appleton, spending more than two weeks at the hospital.

“The nurses were great,” he said. “They took good care of me, always checking in on me, going above and beyond.”

One nurse in particular had quite an impact on Jameson.

“Of course I was feeling terrible, so I didn’t have an appetite,” he explained. “They encouraged me to eat, but I didn’t really want to. The only thing I said I wanted was a peanut butter and jelly sandwich.”

So the nurse made a special request and brought him a PB&J, which he enjoyed. It is small gestures from the care team that he said made all the difference. 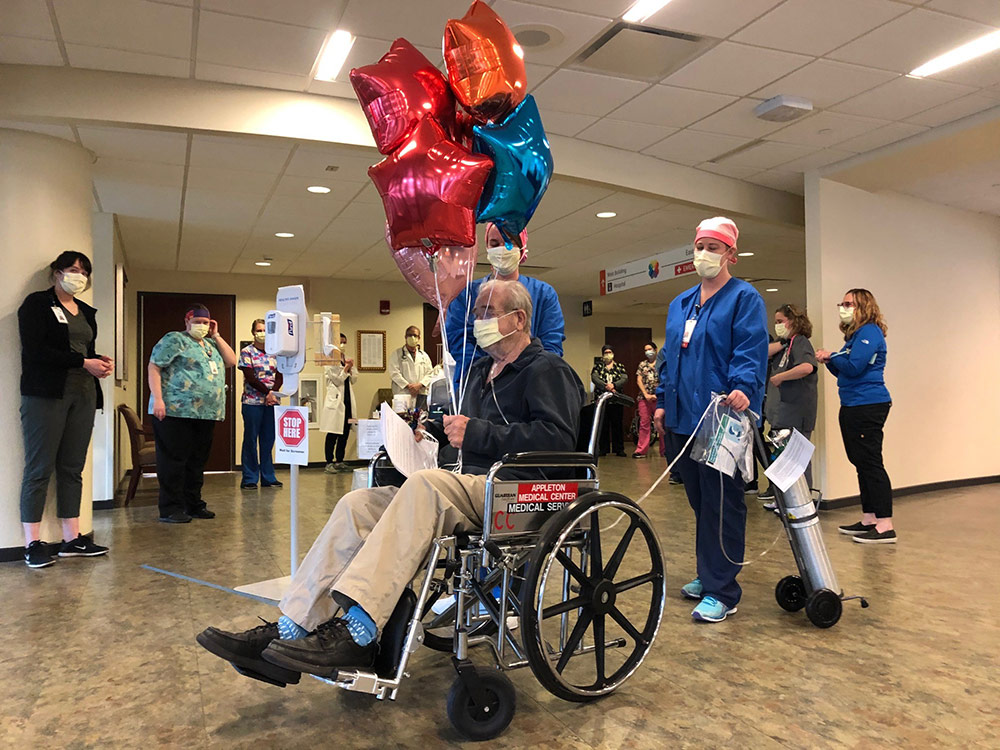 For the safety of patients, team members and others, visitors are limited on the designated COVID units at ThedaCare hospitals.

“Not being able to visit was hard on my wife,” he said. “The nurses and doctors would call and give her updates, and that helped. Then she would relay that information to other family members. It was a good system to keep everyone updated.”

Jameson was the 11th confirmed COVID-19 positive patient to be discharged from ThedaCare. As he left the hospital, team members lined the halls, celebrating what is called a “Code Happy”, when a COVID patient goes home. Click here to see the video of his “Code Happy”.

He is now doing well, and feeling much better. He also has a message for the community.

“Wear a mask, please,” he said. “It’s something small that we can all do to protect each other.”

He went on to thank all of the ThedaCare team members who provided care for him during his stay.

“I am very grateful for every single person,” he said. “They truly helped me beat this.” 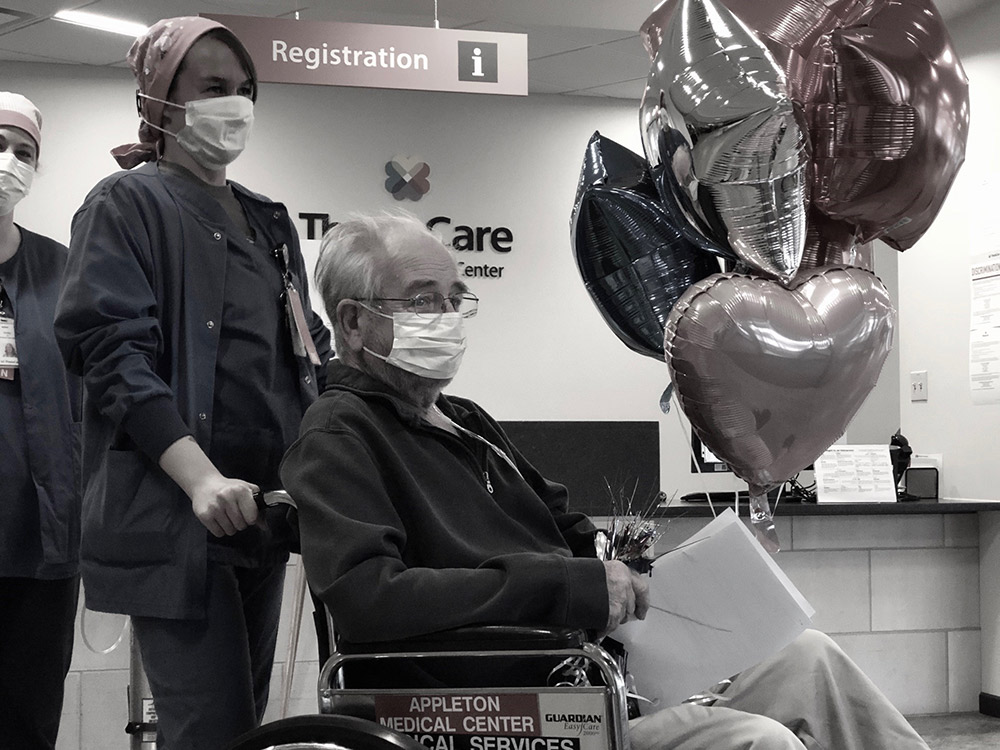 For more than 110 years, ThedaCare® has been committed to improving the health of the communities it serves in northeast and central Wisconsin. The organization delivers care to more than 600,000 residents in 18 counties and employs approximately 7,000 health care professionals. ThedaCare has 180 points of care, including seven hospitals. As an organization committed to being a leader in Population Health, team members are dedicated to empowering people to live their best lives through easy access to individualized care, supporting each person’s own health and wellbeing. ThedaCare also partners with communities to understand unique needs, finding solutions together, and encouraging health awareness and action. ThedaCare is the first in Wisconsin to be a Mayo Clinic Care Network Member, giving specialists the ability to consult with Mayo Clinic experts on a patient’s care. ThedaCare is a not-for-profit health system with a level II trauma center, comprehensive cancer treatment, stroke and cardiac programs, as well as primary care.

For more information, visit thedacare.org or follow ThedaCare on social media. Members of the media should call Cassandra Wallace, Public and Media Relations Consultant at 920.442.0328 or the ThedaCare Regional Medical Center-Neenah switchboard at 920.729.3100 and ask for the marketing person on call.

Federal and health officials have expanded eligibility to include individuals age 5 and older. Pfizer is currently the only vaccine authorized for minors. Vaccine appointments at ThedaCare can be made through your MyThedaCare or MyChart account.

For more information about vaccines and how to schedule an appointment, explore our vaccinations page.
Learn More